We all know that a visit to Temple Bar and The Guinness Store House is a must when visiting Dublin, but the city has lots more to offer that’s off the beaten track. Take it from us – we’re locals! Here’s our list of 12 unique things to do in Dublin:

Go for a swim at sunrise in Dun Laoghaire

We know it sounds crazy to set an alarm to go swimming at 4.30am, but when you see that sunrise over the Forty Foot in Dun Laoghaire it will all make sense. The Forty Foot has been welcoming swimmers for over 250 years and is famously mentioned in James Joyce’s Ulysses.

Make sure you bring a flask of tea and a fluffy towel because the water is very cold!

Walk along the skyline on the roof Croke Park

Take a tour of Croke Park on its 17-storey high skyline. You’ll see the capital’s main landmarks with an eagle-eyed view while learning their history from the skilled tour guides. Hear the story of Irish sport and enjoy the incredible view from the platform that’s suspended over the Croke Park pitch itself.

The skyline tour is run in conjunction with Ericson. Download the Ericson Skyline AR app before your visit to experience the city’s landmarks in augmented reality. Hover your phone over the images at the viewing points and watch the famous sights come to life.

Hear the story of Ireland’s rebellion in Kilmainham Gaol

Kilmainham Gaol was an operational prison from 1796 until 1924. It holds a monumental place in Ireland’s history particularly around the time of the 1916 rebellion.

Visits to Kilmainham Gaol are led by expert tour guides sharing the stories of the men, women and children that were held there. Peek inside the cells and read the original lyrics and words written by Ireland’s freedom fighters over 100 years ago. A visit to Kilmainham Gaol is a must.

Pay your respects at Glasnevin Cemetery

Glasnevin Cemetery isn’t just a final resting place for deceased loved ones, it’s also the world’s first cemetery museum. Hear the tragic tale of the 1918 flu victims, learn how graverobbers completed their business and use the award-winning interactive exhibition to see how Glasnevin Cemetery has changed over the years. It might sound morbid but believe us, it’s fascinating!

The Natural History Museum is home to over 10,000 exhibits that showcase the wonders of the natural world. Since opening in 1857, the museum has earned the nickname ‘The Dead Zoo’ due to its vast collection of taxidermy animals from Ireland and the rest of the world.

Here you can see skeletons of the now extinct giant Irish deer and witness all 20 metres of the long whale skeleton that is suspended from the ceiling. Entrance to the museum is free.

The Guinness Storehouse is one of Ireland’s most popular tourist attractions – and rightly so. But, slightly less known is its experimental brewery at St James Gate. The Open Gate Brewery has been operating for 100 years and the gates are open for you to taste their creations.

You can visit on Thursdays and Fridays from 5.30pm – 10.30pm and from 2.00m to 8.00pm on Saturdays to sample a paddle of four beers for €9. Beer experts are on hand to make recommendations and, if you’re hungry, you can buy specially matched food at the bar.

See the deer at The Phoenix Park

When they’re not busy at Santa’s workshop, fallow deer can be found wandering around the green pastures of the Phoenix Park. These wild animals were imported for hunting purposes in the 17th century and now they enjoy a peaceful life raising their fawns and following their herds throughout the park’s 1,750 acres.

Though some tourists choose to get up close and personal with the deer feeding them and posing for photos with them – it is not advised. The deer are wild and should be admired from afar.

Wave to the seals at Dublin Bay

Seals are regular visitors to Dublin Bay. There are two different species: the harbour seal and the larger grey seal. The best place to catch a glimpse of the seals is on the northern end of Bull Island near Sutton Creek. They haul out of the water here at low tide to rest and digest their food. Keep an eye out for baby seals during September and October – it’s pupping season!

A truly unique dining experience in Dublin, Peruke and Periwig has stayed true to its Victorian heritage with the addition of modern cocktails. Walking into the bar – which was a wig shop in the 1700’s – is like taking a step back in time. The interiors are dark, luxurious and oh so romantic.

Their award-winning mixologists have been expertly trained to create cocktail masterpieces for guests often completing the finishing touches at the table with a portable blow torch to give drinks that smoky flavour.

The Musical Pub Crawl of Dublin has been described as a ‘moving concert’ around Dublin City. Guests of the tour will be brought to four of Dublin’s best pubs for live music where they will hear traditional Irish music, see professional Irish dancing and tuck into some typical Irish food.

You’ll feel as good as Irish after this tour – you’ll know the story of Irish music, have seen the full range of styles of Irish dance and eaten boxty. What is boxty you ask? You’ll have to wait and see!

The musical tour is €48 per person with dinner and dancing, or €16 each without.

Find your ancestors at the Epic – The Irish Immigration Museum

Hear the stories of Ireland’s 10 million immigrants and learn how they shaped today’s world at Epic – The Irish Immigration Museum. This interactive museum will show how Irish people have influenced global literature, infrastructure, music and other areas of life.

Epic offer a professional genealogy service within the museum. Discover some of your own history and find out if there’s an Irish connection there somewhere.

Have a spot of lunch in Dublin Castle

Built in the early 13th century, Dublin Castle was handed over to the Irish government in 1922 following Ireland’s independence. Now days, this government complex is open to tourists looking to learn more about Dublin’s history and hosts regular exhibitions.

The Terrace Café is located within the castle and promises to “promote Ireland on a plate”. You can dine on the fresh, locally sourced food here while overlooking the picturesque Dublin Castle gardens. Vegan or gluten free? The menu has options for you.

Want to see more of Dublin? Use our online Clayton Hotel Charlemont Concierge for more recommendations and see Dublin like a local! 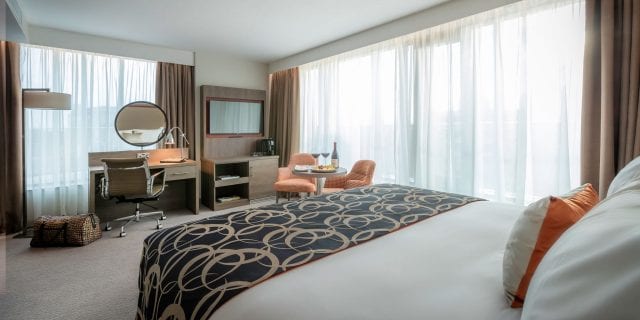 Start planning your trip to Dublin and book your perfect break at Clayton Hotel Charlemont.